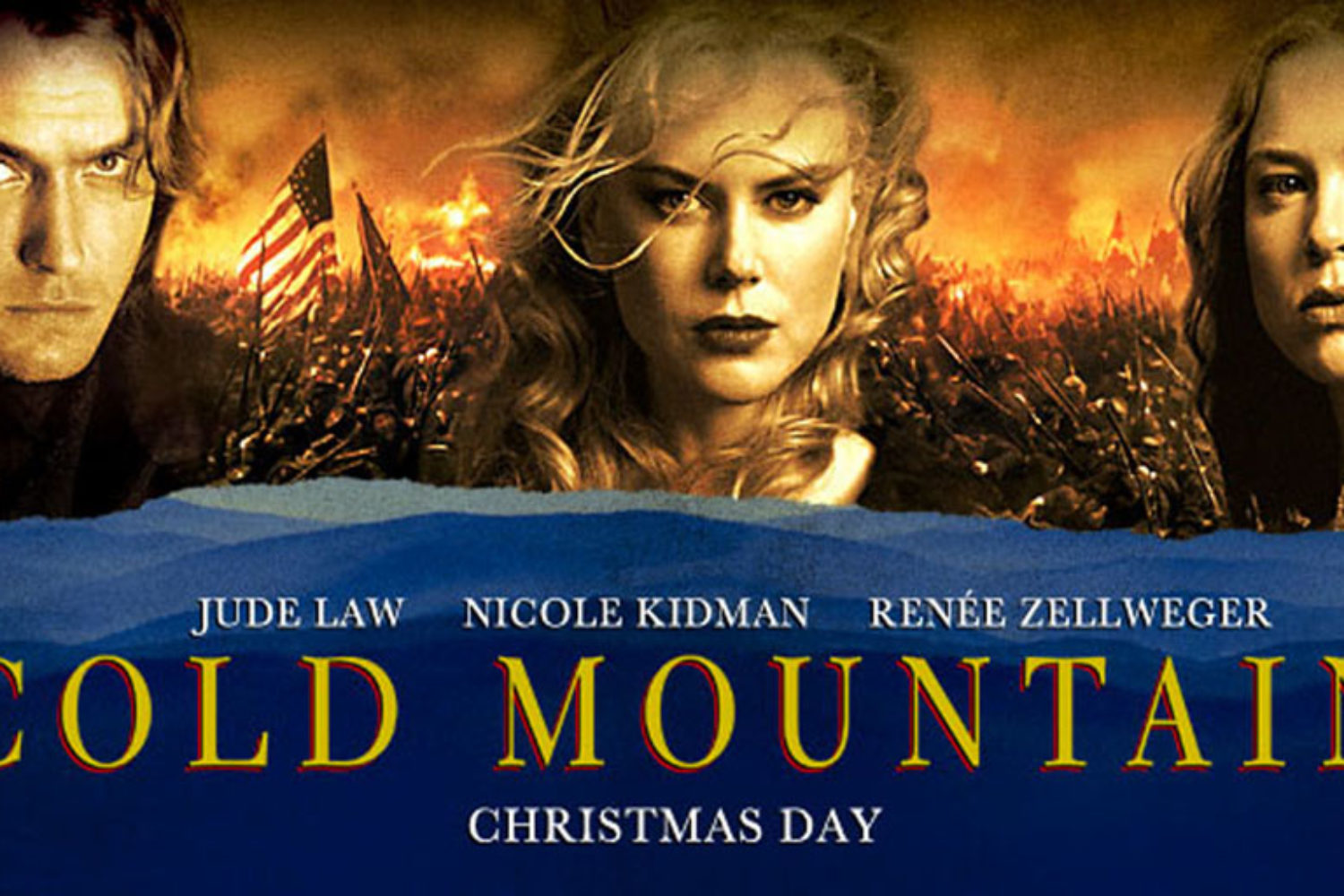 As it happens with the IT industry where a lots of jobs gets outsourced, the same happens – to some degree – with the movie industry as well.

Movies, especially those with a lighter budget and not so known stars, are increasingly being produced abroad (reducing the costs).

Besides Canada (Vancouver) and UK (London) looks like Romania (Bucharest) is another destination for Hollywood for making movies (Bulgaria seem to make a dent too).

There are over 100 film companies in Romania, big and small. Some have their own infrastructure (the biggest), some are renting the infrastructure from others.
It depends also on what genre the movies belong, but the biggest studios can pretty much handle every genre.

I will present the biggest and then I will redirect you to a website which shows all those film productions companies (I don’t know how updated is that database though).

I will make an introduction about filmmaking in Romania below then after that I’ll give more details about film studios from Romania.

Some A but mostly B movies were shot in Romania in the last 20 years and here you have some examples:

By looking at these you will see that most of the movies are B movies with movie stars which once were A (or never were A) but now their time have mostly gone (Jean Claude Van Damme, Steven Seagal, Dolph Lundgren, Cuba Gooding Jr, Tara Reid, Christopher Lambert, Wesley Snipes, Elizabeth Hurley and so on).

The biggest, in terms of budget, movie made in Romania is still Cold Mountain with about $80 millions (main actors were Jude Law, Nicole Kidman, Renee Zellweger – directed by Anthony Minghella). 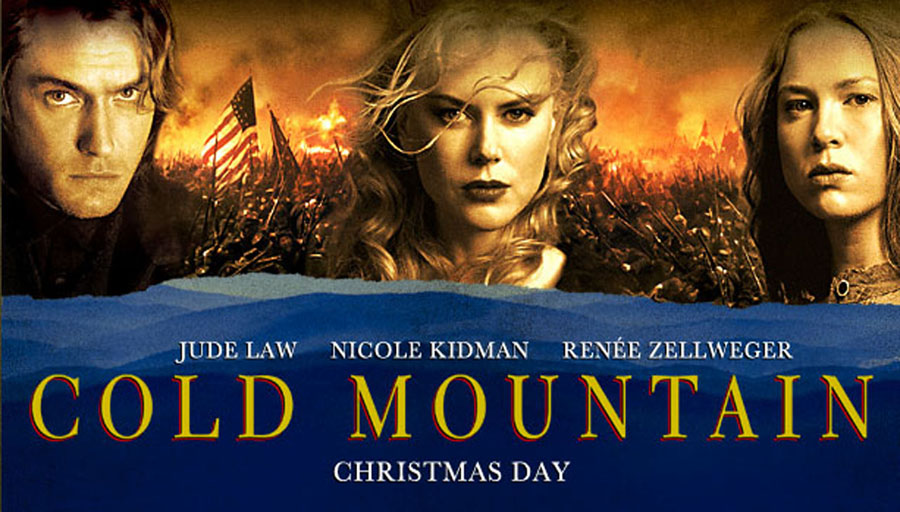 The rest of the movies are low to medium budget, in the action or horror genres (mostly).

Romania has a tradition in making movies, the first film made was The Independence of Romania  (1912), before D.W.Griffith made his The Birth of a Nation.

See here more about the history of moviemaking in Romania.

Petru Popescu is another Romanian-American screenwriter-director in Hollywood.

In the ’70 there was a case when a well known Romanian director at that time was very close to make an historical movie about a period of Romania history but having Hollywood actors as the main cast (Charlton Heston, Orson Welles, Richard Burton, Elizabeth Taylor, Kirk Douglas).

The movie is Michael The Brave  but because of the communist dictator at that time it was made with Romanian actors instead. Even so, the movie was one of the best historical movies made then (the director in case being Sergiu Nicolaescu ).

Nowadays, the Romanian new generation of filmmakers have gone to win the international recognition once again culminating with winning the Palme d’Or at Cannes for the movie 4 Months, 3 Weeks and 2 Days  by Cristian Mungiu (and again with Beyond the Hills), Megatron by Marian Crisan (Palme d’Or at Cannes for short films), Child’s Pose by Calin Peter Netzer (Golden Bear at Berlin Film Festival), If I Want to Whistle, I Whistle by Florin Serban (Silver Bear at Berlin Film Festival).

(See more acclaimed movies in the last 20 years here Romania: What are some of the best Romanian movies? )

Today there are eight main production houses in Romania (the first 3-4 getting the bulk of the business) and I will present all of them below (with contact details).

One of the biggest seem to be Castel Film www.castelfilm.ro (they seem to have most of the foreign movies made in Romania).
Here is their portfolio: http://www.castelfilm.ro/movies

They have:
– 9 Modern fully equipped Soundstages – each stage with separate facilities;
– one of the largest soundstage in Continental Europe: 3250 square meters, a 37 hectares backlot including 15 hectares of forest, available for set construction;
– direct access to a large lake – with a 1000 meters waterfront

They don’t shoot just movies but also commercials and music videos.
The location is 20 minutes by car from the Henri Coanda International Airport (near capital Bucharest).

MediaPro www.mediaprostudios.com is also one of the biggest private filmmaking company from Romania. It’s part of the MediaPro Group, the largest media consortium in Romania (which has also foreign investors).
It was formed in 1998 when the private media company MediaPro bought the state owned studios Buftea. Buftea studios were established in 1957 and produced over 500 films during this time rivaling any Western European film studio at that time.

Many of their productions seem to be Romanian but they have also international productions like Amen (Costa Gavras), Callas Forever (Franco Zefirelli), Modigliani (Mick Davis), BloodRayne (Uwe Boll). 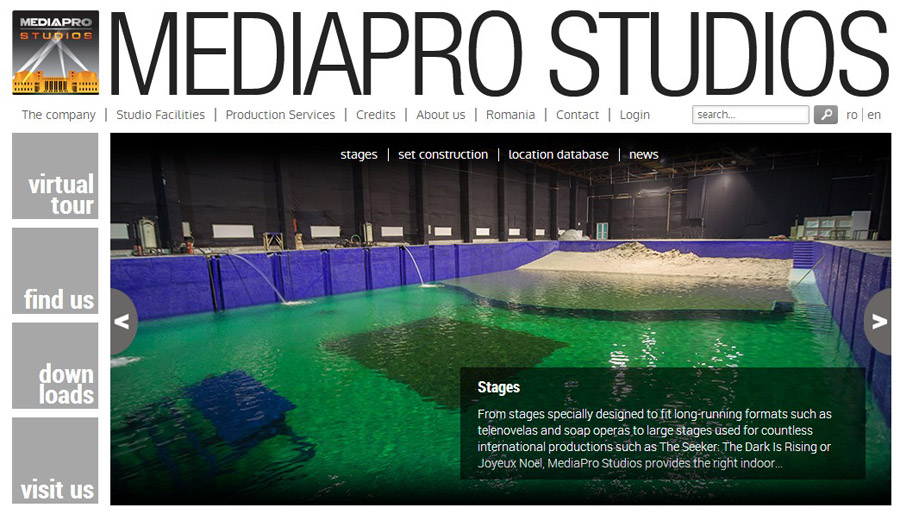 They have also an in-house VFX studio.

Kentauros www.kentauros.ro is one of the newest entrants in the market (established by foreign film people and investors) and was formed in 2003 being a challenger for the studios above.
The studios are brand new using, mostly, the newest technology available on the market. Recently it was bought by the real estate businessman Dragos Savulescu. 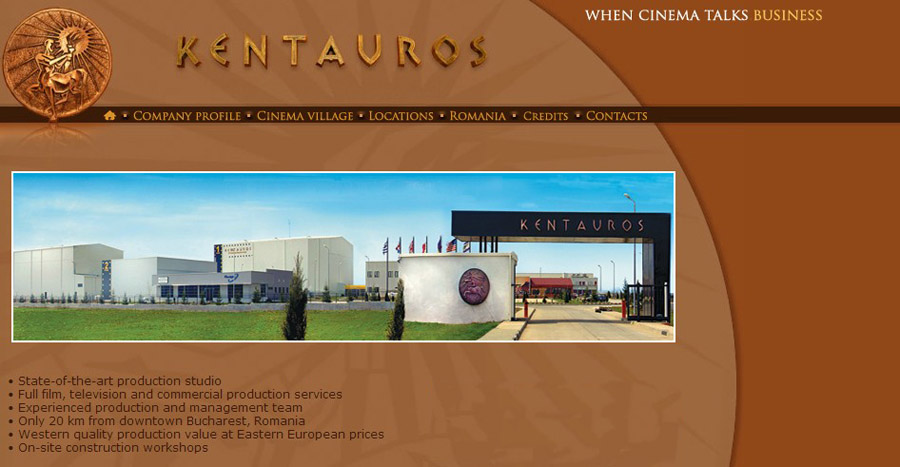 Their portfolio isn’t as rich as the others, for now having only two features made: http://www.kentauros.ro/html/features.php

Mandragora International Group www.mandragoramovies.com was founded in 2004 and exhibited a highly dynamic evolution since its creation, covering activities like the development, production and distribution of films, studios rental and other related services. Currently the group has subsidiaries in Bucharest, Paris and New York.

Mandragora Movies is one of the most dynamic movie production companies from Romania, founded by Bobby Paunescu in 2005, with the aim to produce not only feature films but also television projects. 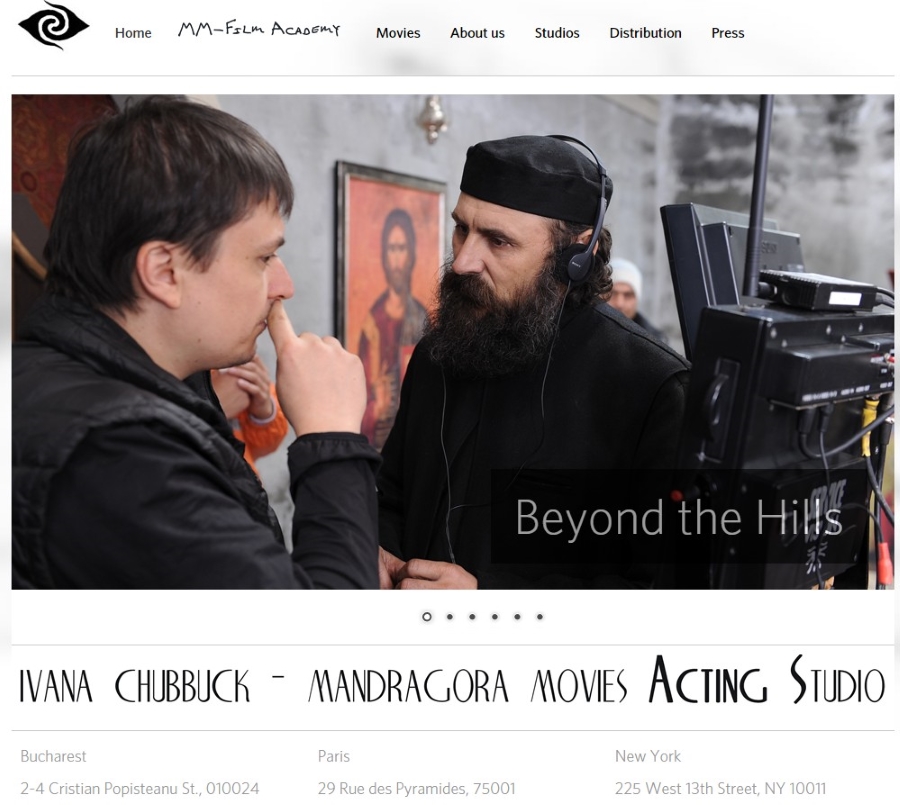 This studio includes:
– 3,000 sqm wooden panels of green screen;
– A 250m long street, with building facades constructed on both sides at a height of 11m;
– A small square with a functional interior set (30sqm) and a position convenient for a bus station;
– A larger square with the building of another interior set (70sqm);
– Functional street lighting at a height of 9m;
– Functional illuminated shop signs which can easily be adapted;
– Sidewalks

The second studio is an exterior period set from the ‘60s, with a surface of 5,000sqm. The construction includes a large square with green space – trees, bench, and statue; a small street with full height buildings facades. The studio also includes two functional interiors of 40sqm and 60sqm.

It was also established in 1992 (like Castel Film), having also its own facilities www.atlantisfilm.ro.
It’s quite close to the city center (Bucharest) – about 10-20 min.

Regarding film production, it seems that this production house worked mostly at French movies.

See on IMDB the movies produced by Atlantis Film: http://www.imdb.com/company/co0020612/

See on IMDB the movies produced by Domino: http://www.imdb.com/company/co0256376/

This company www.librafilm.net is also a smaller film production house which worked at some local and European films. It was established in 1994.
Here is its portfolio: http://www.imdb.com/company/co0166497/ 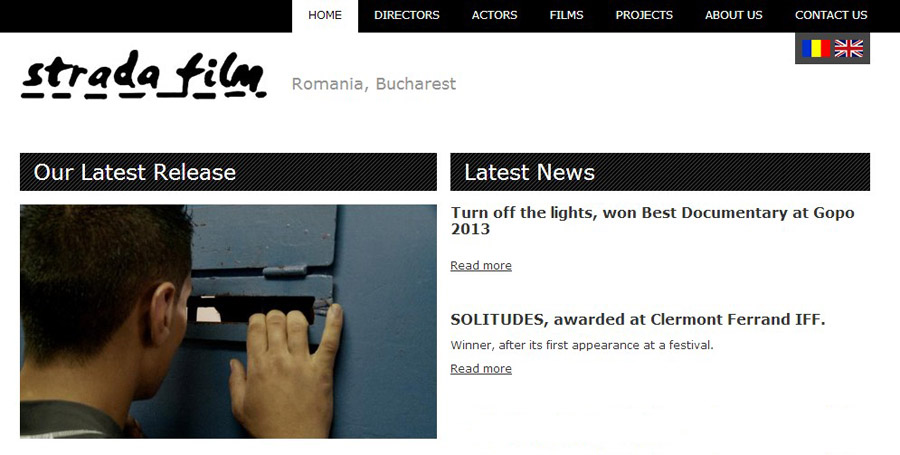 See on IMDB the movies produced by Strada Film: http://www.imdb.com/company/co0160572/

If you are shooting on film then there is a well known lab there with which productions houses above are working with.

The company is Cinelabs www.cinelab.ro
They offer not only film related services but also digital related.

Beside the production houses above there are many other smaller companies.
A list can be seen here: http://www.cinematograph.ro/ro/bazadedate/case-de-productie-film or here http://www.kftv.com/country/Romania (but remember, not all of them can produce a feature film)

If you are looking for dedicated visual special effects (for film) production houses then here are what I found to have the best portfolio. 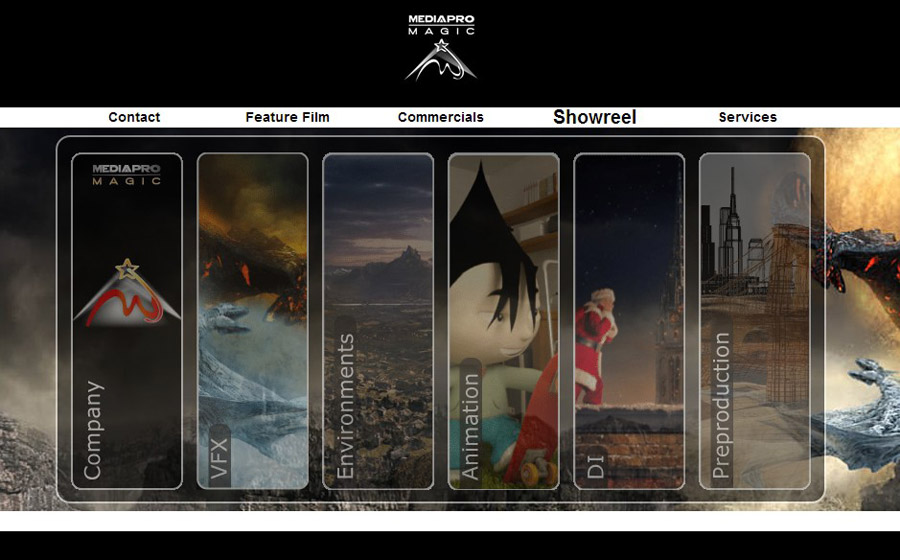 MediaPro Studios is the only studio complex in Central and Eastern Europe to have an in-house special effects department. The team is coordinated by Adrian Popescu and supervised by Nick Allder, Academy Award winner for Alien and a BAFTA award for The Fifth Element.

Umbrella VFX has been at the forefront of post-production in Central and Eastern Europe. The company’s artists have pioneered the use of CG on the regional television market and since inception, they have worked on corporate and non-profit projects alike. The company development strategy opened new directions for its activity in 2007 and  currently Umbrella is present in three countries located on two continents.

Unfortunately, Romanian officials are not involved much in filmmaking.

There is a national authority named “Centrul National al Cinematografiei” (the National Center for Cinema) http://cnc.gov.ro but other than organizing screenwriting contests (and awarding some state money for the winners – those scripts has to involve Romania somehow) they don’t seem to do much.

It doesn’t seem that Romania have laws to encourage film productions, especially co-productions (Romanian+foreign – if they are related to Romania then it may be possible to get some state financing).

There is no a “rebate law” (tax incentives), like you find in some US states or Canada. Maybe this will change soon but there is no date when. But because the work is cheaper there that compensates the lack of these incentives.

Hope these information will help you and any other filmmaker who wants to do movies in Romania.
You can contact me if you want to find out more.